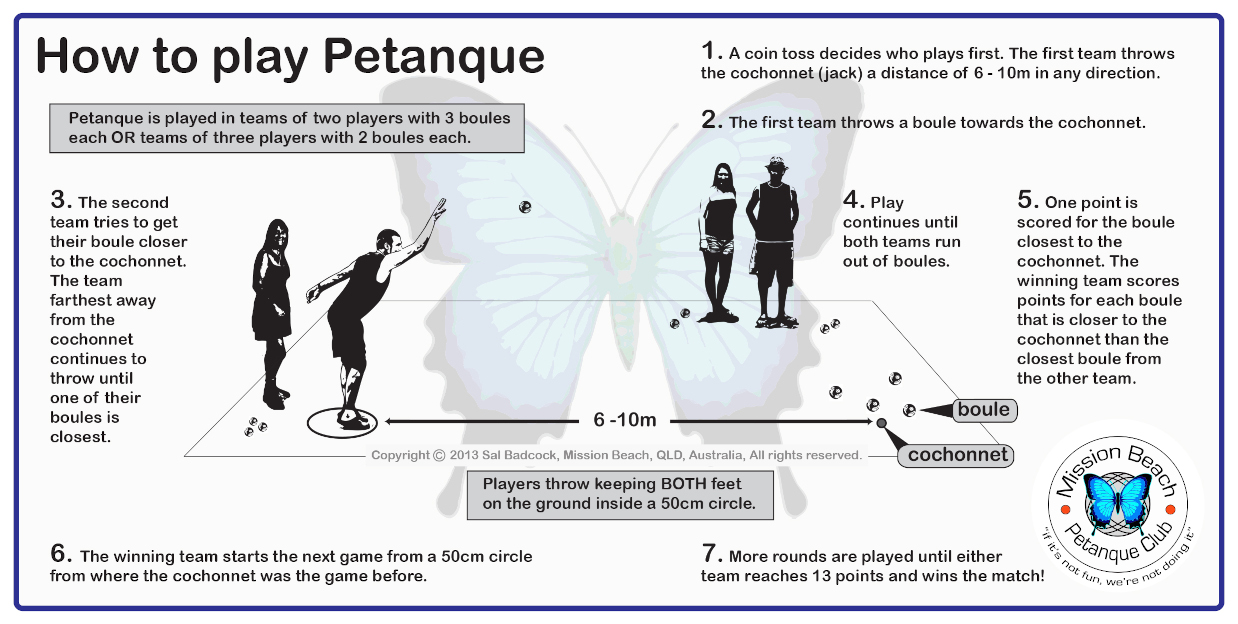 How to Play Pétanque

Although pétanque at tournament level is normally played on a flat, specially-prepared surface, the tradition of the game allows a wide variety of surfaces to be pressed into service. Walkways in public parks are often very suitable, as are many school playgrounds and other hard-packed dirt areas.The game can be played (albeit less effectively) on grass lawns or even on ashphalt with a light dusting of sand. Just about the only surface that is definitley not suitable is a sandy beach, however -- special light plastic "beach pétanque" balls can be obtained to make beach play possible.

The game is played between two competing teams. The size of each team can vary from one (mano a mano style) to three. Thus any group of people numbering between two and perhaps six can enjoy a game. The most usual team make-ups are two against two (doublettes), and three against three (triplettes). In doublettes each player plays three boules, and in triplettes two; so the total number of boules in the game is almost always twelve.

So, you've selected your location, got some friends together with some regulation boules and hopefully a regulation cochonnet. What now? Well, you need one final item of equipment -- a coin to toss to see which team goes first.

A player of the team winning the toss selects a starting place and scratches a circle in the ground officially 35 to 50 centimeters diameter. They then toss the cochonnet a distance of from six to ten meters in any direction; however, it is technically invalid if it ends up less than half a meter from any wall, tree or other obstacle. The game proper starts when a player of the first team, standing with both feet in the circle, throws a boule and attempts to place it as near as possible to the cochonnet, preferably between him and the cochonnet. There is no restriction on how the boule is thrown with the exception that both feet must remain in the circle until the boule has touched the ground.

Typically the boule is thrown underarm with the palm facing backwards. This method is considered to provide more accuracy and imparts necessary backspin to stop the heavy boule from rolling too far after the first bounce. This method of throw is most suited to accurate positioning of or pointing the boule. To drive or shoot the opponents' boule out of the game usually involves a throw with a lower trajectory in some cases rolling the boule completely along the ground is an equally valid legal throw. The second team must then play until at least one of its boules is closer to the cochonnet than the first team's boule. This can be accomplished either by more accurate placing of a boule, or by violently shooting the adversary boule out of the game by impact. Assuming the second team achieves this before running out of boules, the first team then plays until successful or out of boules, and so on alternately until all the boules of both teams have been played.

If the cochonnet is displaced, the game continues unless the cochonnet either goes outside an agreed perimeter, or cannot be seen from the circle. In thatcase the round is annulled and re-started; however, if the cochonnet is knocked away when one team has thrown all its boules and the other team still has boules in hand, the team with the boules earns one point for each one that it has not played.

When both teams have thrown all their boules, the round is complete and the points are determined. The winning team receives one point for each boule closer than any boule of the opposing team (Thus the maximum possible score in any one round is normally six). A player of the team winning the round again throws the cochonnet and another round begins. The game usually ends when one team has accumulated 13 points.

The only really ssential equipment is a set of three steel boules. A set costs anywhere from US$5 for a rusty old set you may be lucky enough to come across to US$120 for a competition set. To be legitimate for competition play, a boule must conform to the following specifications:

A player who specialises in pointing (or placing) should normally favor a small, heavy boule. A heavy boule is slightly more difficult to displace, and a boule of the minimum allowable diameter presents a smaller target to the opposition's shooters. Women and young boys, usually having smaller hands and less arm strength, frequently compromise by selecting a boule that is both light and small.

A shooter should choose a lighter boule for the best chance of success. This may seem surprising, but in fact the decreased momentum of a light boule gives it the best chance of remaining in place after knocking an opponent's boule out of the game (the perfect, and much admired, shot known as a carreau). A shooter should not use a small boule: a shot that just barely misses with a small boule might have been effective if only that extra 5 mm had been on the radius! In choosing a boule, however, perhaps the overriding consideration is "play with what you feel comfortable with."

A proper cochonnet is turned from beech wood and is between 2.5 cm and 3.5 cm in diameter. In the South of France, the home of pétanque, a cochonnet can be bought for very small change indeed. It may help to have a brightly-colored cochonnet, especially in conditions of low light, but the rules specify that a cochonnet may be stained but not painted.

A cochonnet is not regarded as essential, since in any gathering of pétanqueurs many people can be counted on to provide one. At a pinch, many natural objects can stand in.

Usefulness of a tape measure should be obvious: To settle arguments as to which of two boules is closer to the cochonnet.

As with all sports, equipment shops will try and sell you whatever they can, with the assurance that "you'll find you really need this". The following pétanque trivia is definitely not necessary -- although some of it is undeniably fun....