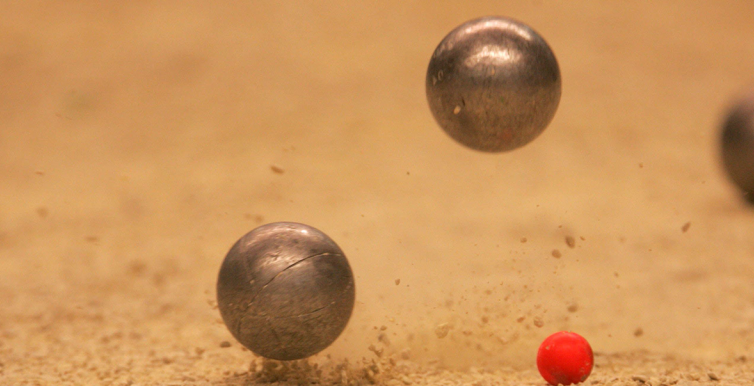 It is more French, perhaps, than the baguette or de Gaulle: such a fixed feature of the landscape as to be nearly invisible to native eyes. But occupying nearly every dusty clearing in Paris and province is an array of gleaming silver balls and an assortment of characters engrossed in what to the unknowing passerby looks about us exciting as croquet. So just what is this favorite of French pastimes all about?

The game is pétanque, or boules, of course, and like most things French it, too, has a colourful history. To begin with, a pétanque partie can take a variety of forms, players can go single, ("tête-à-tête"), or compete in doubles, ("doublette") or triples, ("triplette"). There is the boules Lyonnaise form, played with a bigger ball: the jeu provençal; a British version battled on grass and a Spanish one waged on marble tiles. But throughout France, it's pétanque, a descendant of the jeu provençal, that is king.

Born in its present form in 1910 in the small Mediterranean fishing port of La Ciotat (Provence), pétanque traces its origins to the Greeks who, on advice of their doctors, took up "spherique" tossing stone balls for improved strength, flexibility and - the Greeks' uppermost concern - the regular exercise of thought and calculation.

The Romans amused themselves with iron-covered wooden balls, and it was in their colosseums that the game became a spectator sport. Writings from the Middle Ages include tales of bouliers, although King Charles V was less celebratory of the practice, issuing a royal ordinance in 1369 which subjected players to severe reprimand, their time being better appreciated in defence of the crown.

As with most cultural institutions, pétanque underwent a resurgence during the Renaissance, but the game was harshly criticised as public debauchery by jealous promoters of other, less popular games. After a short-lived revival, pétanque was banned a second time in 1629. But honorable defenders, the clergy, soon came to the rescue and the game was again legal, though relegated to the privacy of homes and monasteries.

During the seventeenth and eighteenth centuries, pétanque was fully integrated into the daily ritual, evolving into more of a competitive sport than a simple diversion. As its popularity spread throughout Europe, artists immortalised the game; Goya and Brueghel, among others, painted scenes of this new social phenomenon.

The Birth of Pétanque

If the jeu de boules (game of bowls) dates back to the times of the Pharaohs, the game of pétanque is only 90 years old. The anecdote which follows has had its authenticity confirmed; this is to let you know the circumstances which contributed to its creation in 1907.

At La Ciotat in the south of France, an important shipping port, players of la longue (bocce), a provincial game of the area, used to meet on a ground in the vicinity of the town to play their favourite game. Jules Le Noir, a former champion of la longue (bocce), who suffered from chronic rheumatism, was the only player to be allowed to sit on a chair to watch the game when he was not playing.One Sunday, the game took too long to finish. Jules Le Noir, sitting with a few boules in his hand, was pointing and shooting at a distance of two to three metres.

"What are you doing? "Ernest Pitiot (one of the players) asked.
"I am just killing time."
"It looks fun. What about drawing a circle? We will set a limit of three metres and play within the circle."
"Does this suit you?"
"Let's try", Jules said.

Providing Jules Le Noir didn't have to balance on one leg to throw the boule or move three steps forward to aim, he retained the excellent skills he always had. The match between Pitiot and Le Noir attracted a lot of people, amongst them Father Aubrey, a champion of la longue (bocce), who decided to try this new pastime.

Over the next few months, this new game was played, with the rules constantly changing, till one day Ernest Pitiot's brother organised a competition in 1910. Eight teams, of two players each, took part. The success of that first competition was so great that other competitions took place with more and more players. LA PÉTANQUE WAS BORN!

The game of pétanque was promoted from town to town very rapidly by the travellers and fishermen of the region. You know the rest. A plaque commemorating the creation of this game is on a wall surrounding the ground and is dated 1910. The ground has actually been renamed the Ground of Pieds Tanqués (joined feet). Today the game is organised much the way any modern sport is. 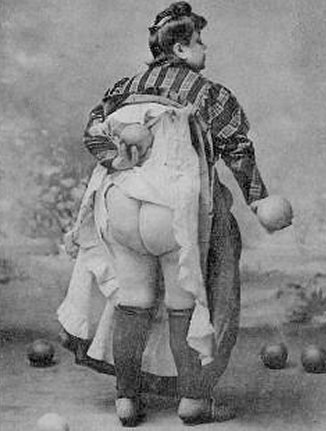 It would appear that this tradition started in France's Savoy region, far from the sunny South! The first Fanny was a waitress at the café de Grand-Lemps, just after World War I. As legend would have it, she was so kindhearted that she would allow customers who had lost a game of boules without scoring a single point to kiss her... on the cheek.

This went on until one day the village mayor lost a game and came to collect his "prize". No one knows whether Fanny had a grudge against hime and wanted to humiliate him, but we do know that she stepped up onto a chair, lifted her skirt and offered him... a different pair of cheeks! The mayor was up to the challenge though, and less than a second later, two loud kisses resounded through the café. This was the beginning of a longstanding tradition...

The problem with this charming ritual is that players don't always have a Fanny to hand. That is, a Fanny who is willing to bare her backside in public. This is why, everywhere boules is played, a fake fanny is proudly displayed. The unhappy losers are obliged to kiss, in public, the generous cheeks of a Fanny whether in a painting, or made of pottery or as a sculpture. Thus, the consolation prize has become the ultimate humiliation for boules players everywhere.